Kelowna is situated in the beautiful Okanagan Valley in British Columbia, Canada. The GlenmoreEllison Improvement District (GEID) supplies the Glenmore Valley as well as the McKinley Landing and Ellison areas. These areas are now supplied from water from Okanagan Lake and supplemented with water sources from the mountains and wells.

The Trustees and staff invite you to step back through time to a beautiful (but arid) place called Dry Valley (Glenmore), where economic boom or bust depended on the construction of an effective and reliable water system. Although simple in theory, developing water works proved a slow and frustrating process influenced by powerful land developers, engineering obstacles, difficult climatic conditions, legal disputes, bankruptcy, and economic discrimination. Read on to see how GEID’S intriguing history still has implications for Glenmore residents today.

The Okanagan Valley’s semi-arid climate forced early settlers to locate near rivers and lakes. The site of Mill Creek was the deciding factor in the choice of Dry Valley (Glenmore) development. 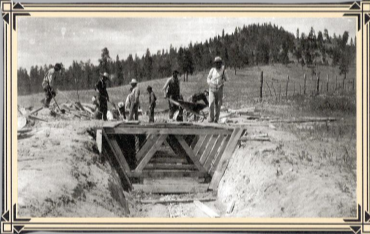 Starting in 1885, Frederick Brent was one of the first settlers to receive a ‘crown grant’ from the provincial government. Boundaries of each grant followed quarter section lines, regardless of topography, and each applicant was granted one or more quarter sections. With an average annual rainfall of only 12 inches Glenmore homesteaders used their land for cattle ranching, logging and subsistence farming.

28,839 feet of concrete-lined and wooden canals and steel flumes were built by Central Okanagan Lands to distribute water to area farms.

From the turn of the century to about 1905, real estate speculation converged in the Central Okanagan intent on buying undeveloped land in the Mill Creek and Glenmore valleys, and the Mission and East Kelowna areas. Whole sections were bought, subdivided and sold by these powerful land development companies.

In 1907, several local businessmen formed Central Okanagan Lands, Ltd. to buy and develop virtually all lands within Glenmore and parts of Mill Creek Valley and Rutland. Financed by a half-million dollar Dominion Trust co. bond issue $300,000 of which was sold in Britain. Central Okanagan Lands was subdivided into orchard-sized parcels and sold to wealthy eastern Canadians who thought “money grew on trees” in the Okanagan. Purchasers paid from $250 - $400 per acre for land they could farm them selves or hire Central Okanagan Lands to clear, plant and operate.

Built in 1911 by COLL, Postill Lake Dam/Reservoir was designed to supply 4000 acres in Glenmore and 800 acres in the Bulman subdivision. Measuring 550 by 28 feet, the dam consisted of a rock-filled log curb on a concrete foundation, and a wooden sluice culvert controlled by three gates in a wooden tower. Condemned by the Water Rights Branch in 1932, the dam required complete reconstruction which increased storage to 3,000 acres feet. In 1947 the dam was raised five feet to increase storage to 4,200 acre feet. Raised and rebuilt twice since then, the dam now holds 4,538 acres feet.

To build, operate and maintain the waterworks intended to benefit its land, Central Okanagan Lands formed the Kelowna Irrigation Company. By special agreement, Kelowna Irrigation Company also supplied water to Thomas Bulman’s subdivisions in Ellison and Rutland. Coownership and all expenses for construction and operation were shared on a 75/25 split, with Bulmans’ Okanagan Development and Orchard Company owning the minor share.

The gravity fed water supply system originated in the Mill Creek watershed east of Ellison, and included the Postill Lake Dam, South Lake Dam, McKinley Regulating Reservoir, and 34 miles of concrete ditches, flumes and steel pipelines. Built by COLL, the 4,125 feet of flume were often suspended on trestles like these.

Despite Central Okanagan Land’s efforts and promises, however, exorbitant operating and maintenance costs forced the ill-fated system into bankruptcy. When domestic water was not installed as promised, landowners sued the company and its agents for gross misrepresentation and fraud. The 1914 failure of Dominion Trust Co. – which held Central Okanagan Lands bond issue deposit – forced the company into liquidation by 1916.

The birth of Glenmore Irrigation District…

With Central Okanagan Lands in receivership, little funding was available for much-needed repairs and maintenance on the poorly built and rapidly deteriorating system. The provincial government was lobbied by both the troubled development companies and landowners to amend the water act to allow the formation of irrigation districts. With the takeover of these privately owned and operated waterworks, financial assistance from the government enabled the newly forming irrigation districts to borrow money to purchase water systems.

The resulting Conservation Fund loaned the newly incorporated Glenmore Irrigation District $27,000 to buy the assets of the defunct Kelowna Irrigation Company. In return, the district committed to make annual repayments of the principle plus interest. 1921 irrigation taxes of $16.00 per acre of Grade A land were based almost exclusively on that annual repayment.

When the Glenmore Irrigation District approached government about funding to cover first-year operating costs, it was told there would be little, if any, funding available. District trustees grappled with how to finance urgently needed repairs without overburdening the alreadystrained orchardists. It was a vicious cycle of too little water, meager crops, poor cash flow, high taxes, insufficient system repairs, too little water….! 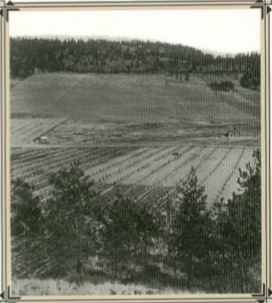 The effects of irrigation were felt almost immediately upon the system's completion. In 1912, Stewart Nursery planted 100,000 fruit trees, establishing Kelowna as an agricultural force to be reckoned with.

As all newly formed irrigation districts were experiencing similar problems, they formed the Association of water Districts in 1923 primarily to lobby the provincial government for interest relief, longer payment periods, and/or forgiveness of incorporation loans. Grit and determination paid off seven years later when a Relief Bill was passed giving 25 percent forgiveness of all borrowing to December 31st, 1923. On October 28th 1928 the Water Rights Branch announced relief for the Glenmore Irrigation District totaling $58,400, leaving a balance of $77,000 still owing the Conservation Fund.

The 1930’s saw the replacement of the aboveground siphon with an underground pipeline made of steel and concrete.

Few changes occurred during the 1940’s, the Glenmore Irrigation continued to operate and maintain its gravity fed, open flume and ditch distribution system. The 1950’s however, saw the complete reconstruction and upsizing of the South Lake Dam, which had been built originally by Central Okanagan Lands in 1918. December 31st, 1949 marked the retirement of W.R. (Bill) Reed as the District's longest-standing manager. Employed first as a surveyor, then as manager of the Kelowna Irrigation Company before it was taken over by GID, Reed served the District as manager, secretary, assessor and collector for almost 30 years. Mr. Reed served the District in a proficient and resourceful way. GID's difficult early years of reconstruction and system expansion proved him to be a technically knowledgeable and a dedicated employee. During the long battle with the provincial government over the Conservation Relief Fund, he was proved an astute negotiator. Highly regarded as an honest, forthright, no-nonsense type of man, he was difficult to replace after his retirement.

Complete rehabilitation of its distribution system to underground, pressurized pipelines was Glenmore Irrigation priority during the late ‘60s. Funding for the reconstruction and upgrading was made possible with the passing of the Agricultural Rehabilitation and Development (ARDA), with the costs being shared equally among the district and the federal and provincial Governments. The 1970’s saw the introduction of chlorine to provide a safe supply of domestic water, the construction of a dam on Bulman/Moore Lake, and the aggressive search for sources of groundwater with the Glenmore Irrigation Boundaries.

Glenmore and Ellison Irrigation Districts were amalgamated on April 5, 1990 to form the Glenmore-Ellison Improvement District. The District supplied approximately 4000 acres of Grande A land with 3800 connections (approx. 9500 people) domestic connections. Water is still collected and stored in Postill, Bulman, South, and McKinley reservoirs. Three wells, with a fourth under construction, augment the district’s water supply, which is constantly monitored and tested for adherence to Canadian Drinking Water Quality Guidelines. 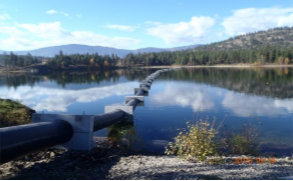 In December 2017, in consultation with the Interior Health Authority, GEID lifted the longstanding water quality advisory for the Glenmore area. The Water Quality Advisory was initially issued to all GEID customers in the spring of 2006. At that time, Interior Health introduced a well-defined set of expectations for all the BC Public water suppliers to meet water quality standards. GEID developed a comprehensive plan to meet Interior Health’s objectives. Over the past 11 years, and with $22 Million of selffunded Capital Expenditure we have
successfully executed a multitude of projects to meet these requirements, and to ensure the future community growth needs are met, while optimizing pre-investments. The water supply and treatment system includes an innovative 34m deep water intake, designed to inhibit invasive mussel growth; a new pump-station with underground piping running through roughterrain with a by-pass line through McKinley Reservoir to preserve the source water quality; a two-reactor ultraviolet treatment plant for removal or inactivation of giardia lamblia and cryptosporidium protozoa; a chlorinator treatment plant for virus deactivation, and a 9 million liter enclosed concrete reservoir. 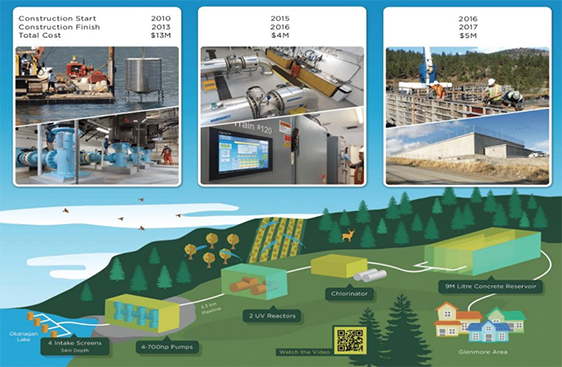 On February 27, 2018 GEID team finalized the complete integration of the McKinley Landing water system. The McKinley landing System is now in normal operation mode, with back-up from Dewdney Pump Station. The GEID water supplied to the McKinley Landing properties has now two levels of treatment, chlorination for a 4 log inactivation of viruses and UV treatment for 3 Log removal or inactivation of giardia lamblia and cryptosporidium protozoa, and is supplied from the Joe Bulach Pump Station, through the enclosed McKinley treatment system.

This is a major improvement from the Dewdney supply operation mode due to: the additional UV treatment, deeper inlet suction screens at JBPS that allows a better and more consistent supply water quality, and increased redundancy due to possibility of back-up from Dewdney PS in case of failure of supply through the McKinley treatment system

In September 2018, Phase 1 of construction to bring treated Okanagan Lake Water to Ellison properties that are located within the Regional District of Central Okanagan, and to separate the domestic and agricultural supply is complete. Detailed design of the second phase is currently underway.